Liam is a total old man baby. I mean he looks like he should have a tiny walker or cane. When he was born I looked at him and thought, “My God he looks EXACTLY like his dad!” And not … END_OF_DOCUMENT_TOKEN_TO_BE_REPLACED

Baby Brand Rep. What the heck is that? Am I right? So, I am going to tell you a little bit about how we started this whole adventure and give a couple tips on how you can get into it, … END_OF_DOCUMENT_TOKEN_TO_BE_REPLACED

Delicious beverage for most Friday nights of the past!

I used to go out all the time. I think there was a stretch in college where Jessie Tyson and I visited Sally’s for like 28 evenings in a row. Jill Dauska, I think you were there for a lot of it, too. Bahahaha! But seriously I lived for the weekends, which consisted of Wednesday through Saturday nights. I thought about it this afternoon: It’s Friday night and I have nowhere to go. And really I’m okay with it.

It’s funny how things change. And how they change at different paces for two parts of the same couple. Brian and I used to love a good night out. Dinner, drinks, dancing – well, me dancing and Brian pretty much bopping quietly to the music. It was so much fun to be out in Minneapolis, or even at places like Billy’s on Grand Avenue in St. Paul. I rarely go out anymore.

I stopped “going out” as much when I got pregnant with Aiden. That is pretty much a given as there would be no more alcohol for at least nine months! Oh, sure, I’ve enjoyed a good time or ten since then, but they are planned events, more structured and many surround parent parties for the kid’s school or other “functions” that require us to be grown ups – no more boozie nights on the town.

Brian took longer to catch up to me and my avoidance of Mama G.’s and Champps. Truly I prefer a nice glass of wine at a better establishment, but even that seems like work. My God I would have to get dressed, in actual clothing, which means no Lululemon. And seriously, I would have to brush my hair. I literally have no time to brush my hair, let alone actually wash it! And a babysitter, which would cost money. All in all, by the end of it, I’m more tired by the time I leave the house to go out than I would have been sitting home ALL night.

And remember how LATE we used to go out? Tammy, you remember for sure because we used to share the mirror on the third floor of Gamma Phi to get ready, a lot. I was talking to my niece last Friday and asked what she was up to over the weekend. She told me she and her friend were going to a house party. “Oh, a house party,” I said, “Fun, I remember house parties! What time are you going over to the party?” “Well, it doesn’t start until 10pm…” Whaaaaa, 10pm? I would have been hoping for at least two hours sleep by that time of night. No, no, I’m in by 10pm. I’ve missed midnight the last three New Year’s in a row. How in God’s name did I used to go out at 10pm? Ugh, makes me sleepy thinking about it!

Last week Brian and I took a few hours together and had dinner at Gianni’s in Wayzata (delicious BTW). At the end of our dinner and in the middle of checking out the chick with the shoulder cutouts in her shirt and the super old guy she was on a first date with, Brian and I looked at each other and said, “Let’s go home.” We are so old, so boring!

Delicious drinks of Friday night present – at least it has a good name, boob…

And yet I reiterate, I am okay with it. I think when I look at what I’ve traded for boozie parties and dancing until dawn I know growing up has all been worth it. I have a home, a loving husband, three beautiful boys and we all have health (knock on wood). I’m totally fine grabbing a bottled water and scrunching up on the couch to watch Annie or The Aadams family with Aiden and Colin.

Even though things have changed, and I’m completely under-dressed, still in jammies from last night, and I have nowhere to go, I’m okay with it. But should you want to visit for a while over a drink, maybe middle of the day, Sally’s is still there and I wouldn’t necessarily say no. 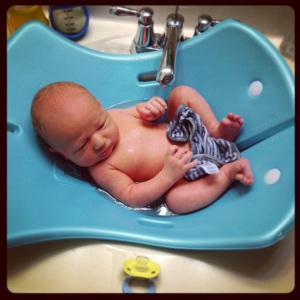 Liam in a Puj

I am totally guilty of not bathing my baby. And sometimes he gets a little ripe. Lucky, I have found help.

Okay, so to understand why I have resisted bathing Liam on a daily basis we have to regress a bit. When I  brought my baby Aiden home over nine years ago I was totally committed to doing EVERYTHING exactly like I thought it should be done. He was bathed daily, and even with all the washing and moisturizing he flaked! His skin literally peeled off. The top of his cute little head was a mess and his baby acne was relentless. I considered resorting to Proactiv (of course I never did use something so harsh on his baby skin, but I was temped)! We were purchasing and using so much of it, I should have bought stock in Aquafor.

Why was he so peely? Why was his delicious skin so icky?! The same thing happened with Colin. About a month into Colin being home I quit bathing him. A little out of necessity and a little out of laziness (I admit). Of course I cleaned out his neck rolls and wiped behind his ears and in his little folds and kept his diaper area clean, but he was only submerged about once a month. His skin became clear and naturally moisturized. It was a miracle! Note to self, don’t bathe the baby so much.

Liam has enjoyed a few baths, but Aiden is constantly telling me that the baby smells like cheese. I told him cheese is made from milk and the milk that sets on Liam’s breath and along the collar of his onesies sure might smell like cheese from time to time. He can get a little ripe and I actually (and a bit shamefully) don’t mind at all. I love the smell of his stinky little toes and I can often find bits of lint clenched in his tiny hands!

Like Colin, I keep Liam clean by sponge bathing him, wiping his baby folds etc… While on a recent visit to Galleria I was chatting with the ladies at Blue Mercury who were cooing over Liam and asking all kinds of questions. “His skin is so nice,” they were all saying. I told them that I rarely bathe him, I just wipe him down. One of them suggested a newer product (not one I recall from Aiden’s baby days) by Mustela. It is the PhysiObebe No-Rinse Cleansing Fluid. Wheeee, what a great product!

PhysiObeb – Get yours by clicking HERE

Okay, first of all it smells wonderful. It is light and fresh and leaves baby smelling completely clean. Simply pump some of the liquid onto a washcloth (I have used my Gerber diaper/burp-cloths for this, too – and BTW using Gerber diapers as burp-cloths will be a post for another day) and wipe away the stale milk, linty hands, stinky toes and ishy diaper area. Voila, clean baby! And you keep baby’s skin from getting overly dry by avoiding the constant baby washing.

You can’t go wrong with Mustela products for baby. They are free of chemicals and are tested to be hypoallergenic. The Mustela gift set includes a bottle of PhysiObebe and a few of their other most popular baby products – if you don’t have a newborn baby of your own right now this would make a great gift for other babies in your life!

My other must-have find for bath-time, post Aiden and Colin, has been the Puj baby bathtub. Okay, this thing is great! It fits into most sinks and allows you to have both hands free as baby nestles neatly into the seat which is formed when the Puj is folded. It rinses clean and I simply hang it in my shower too dry and return it to Liam’s closet when not in use. It unfolds for easy storage against a wall or under a crib. Wish I would have thought of this! The bath slings and tubs I had for the older boys lasted a very short while before they mildewed or became just plain gross and were tossed.

An unfolded Puj bathtub – get yours HERE

So, now you know the secret to my Liam’s pretty skin – he doesn’t bathe regularly (having Brian’s genes doesn’t hurt, either)! So if you want to keep baby’s skin looking like new, stay out of the water and consider trying out Mutela’s PhysiObebe. And when you do need to bathe baby, really, the Puj is awesome!

All in all I hope the advice helps you avoid hearing from a random stranger that your baby smells like cheese!